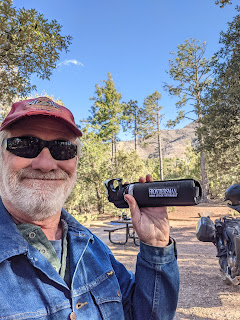 So here's a close-up of my look of renewed confidence. Bear spray must be some pretty nasty stuff if it wards off 1,000 lb. furry creatures like bears. I'm hopefully never going to use this stuff. And hopefully there'll be no accidental discharges, neither in my saddlebags or tent. And hopefully I won't have to harm any furry creatures who's turf invading. But this little canister did give me a level of confidence upon crawling back in my tent for the night. I'm at Ramsey Vista CG in Carr Canyon. Elevation approximately 7,000 ft.
Posted by JG at 6:56 AM No comments:

I've had a couple of mini adventure campouts last week and this. Last night got a little scary. After camping Monday night a bit north of Morenci, I'd continued north and then east on 260 from 191 near Springerville. 260 runs west through Show Low out to Payson. Getting closer to Payson,  I turned south on a dirt/paved road that runs about 60 miles on a wonderfully scenic route through Tonto NF to Roosevelt Lake. Still up in the mountains, I found a campsite with a fire ring and level ground. I made a little dinner right away, and cleaned up all of the food. I set up my tent, built a fire, and after the sun set, I was just sitting quietly next to the fire.

I turned on the weather radio and almost simultaneously, I heard some twigs breaking in the forest. I turned down the radio and all was silent. When I turned the radio back on, I could hear the crunching through the leaves and pine needles again. Hmm...I thought. While searching for firewood earlier, I'd seen some fairly fresh bear scat. So with this movement in the woods I was now on high alert. I pulled out my flashlight and started to scan the trees. And sure enough, there were four glowing little eyes sort of weaving and bobbing, watching me. My blood started pumping. I was somewhat alarmed as these two sets of eyes, about 25 yards away, each seemed to be about a foot apart. And I thought bears eyes were generally pretty close together. So unless it was actually a cow or something, (which it definitely was not), they were pretty large bears. I stood up and grabbed the thickest stick I could find in my stack of wood and banged it against a thick log. It made quite a loud crack again and again as I yelled, "No! Bad bear! Bad bear!" And eventually the glowing little eyes disappeared. I was trembling for a while, and kept doing 360° scans of the area for the next hour. I feel silly, but I certainly considered which direction my motorcycle was pointed and how quickly I could jump on and take off. Unfortunately I'd have had to leave the tent and other equipment until I could come back the next day. But it turns out that wasn't necessary and I had a moderately restful sleep inside the tent, wearing my boots, riding suit, and helmet! I had to keep telling myself, "Jeff, they've gone away." And truly they had. It was about 4:00 a.m. this morning when it started to get light, and at 32°, I headed back south towards Roosevelt Lake and Globe, all gear safely packed. Isn't that wild! I guess one additional precaution I could take in the future is to try to camp near other people. It pays to be aware of your surroundings.
Posted by JG at 5:55 AM 1 comment:

15 miles north of Tucson is the town of Oracle. Oracle is about half the size of Bisbee, Az, with only 3500 residents. The elevation is 2000 ft higher than the city of Tucson at 2500 ft, and closer to the elevation of Bisbee. The Willow Springs Ranch is made up partly of a State Land Use Area, west of Oracle. With a Land Use pass, the area is open to free camping, but has no facilities. There are no natural water sources, although there is water for the cattle that roam the area. The sunsets are majestic, and there are normally no people for miles. There is little vehicular traffic, and that mostly on weekends. I saw several RVs pulling trailers carrying 4x4 off-road vehicles. All vehicles generate large quantities of dust as they pass, given the lack of moisture available. This trip was my first multi-night camping trip with my new pick-up truck camper. The accommodations were basic but adequate. I spent the one night and then headed SW back through Tucson to the Buenos Aries National Wildlife Refuge. 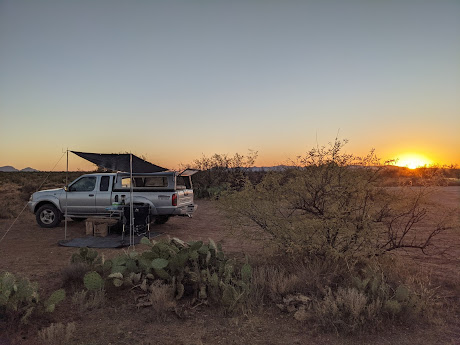 Located 8 miles north of the border town of Sasabe, Az, BANWR, (Buenos Aries National Wildlife Refuge), is a 100,000 acre semi-aquatic refuge for animals and birds during migration. Though not often sighted, pronghorn are present as part of a wildlife rehabilitation project. There are many bird species wintering here and it makes for grand birding walks. On this trip I again only spent the one night, but got to sharpen my pick-up truck camping skills. Using devices that use the small 1 lb. canisters of propane allowed me to adequately heat and light the camp area. I did manage to use tarps to secure a small indoor space for heating, with due concern for appropriate ventilation. Although some public areas have restrictions for campfires, none were in place for BANWR this night. 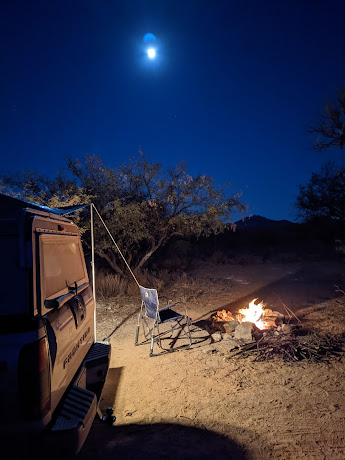 This sign outside a church in Animas, NM, caught my attention. It's something about the cowboy, the horse and the cross. It's conjures for me the western theme well. I've no other pictures of Animas, it was just a crossroad town in the middle of the ranchland in extreme southwest New Mexico. It's a harsh land. Hot and dry and lots of bright sun. But the desert flourishes with it's bit of seasonal rain. And the flora, though most of it seems out to kill you, has grown on me. I took awhile for the Florida scrub to get into my heart, but I think that the desert southwest is finding a spot as well. 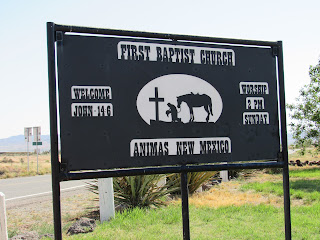 As of this writing, I'm home in Bisbee, Az. The summer heat will drive me north again. So there's another adventure awaiting.  More to follow...
Posted by JG at 1:31 PM No comments:

Buckhorn Ranch was a solid off-road adventure for the Twin. Fully loaded I'm weighing in with about 100 lbs. of luggage. At 185 lbs. the total gross vehicle weight with a full tank of fuel and rider, I'm at about 800 lbs. The extra 120 lbs of luggage rides fairly high on the motorcycle, making for a tall center of gravity, and worthy of consideration in selecting off-road routes. A highly technical route with either deep sand, or large rocks is absolutely out of the question. But usually a county-maintained road is manageable for me. With one year of off-road adventure riding behind me, I consider myself an amateur. Knobby tires have helped a great deal, but the more difficult terrain of some areas are still way beyond my skill level. Plus, I'm riding alone. A tip-over even at standstill is something I can handle, but a crash in desert terrain could be a real issue. I'm often out on rarely traveled routes. On a positive note, between cell-phone and ham radio communications, I'm rarely out of touch with civilization.
So Buckhorn Ranch took me on a 25 mile ride that ran relatively parallel to Hwy 180 south. I came to a familiar spot on 180 and headed down into the city. Silver hasn't changed much since I'd moved away in 2015. But the lockdown is more restrictive than in Arizona. Masks are to be worn in public, and the restaurants are only serving to-go meals. 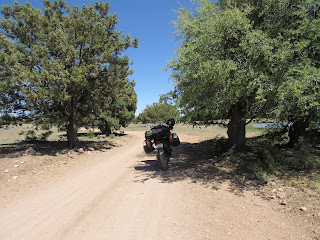 Entering Cave Creek from Portal, the looming mountains on either side of the road hit you right in the heart. They are majestic in grandeur and scope. 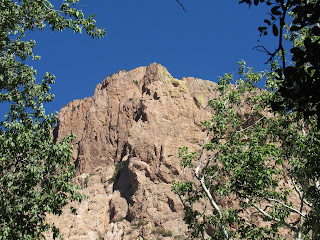 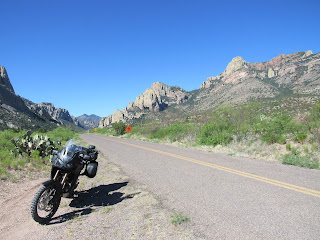 Camping alongside the winding stream makes for great sleep time and peaceful dreams.
Posted by JG at 1:09 PM No comments: